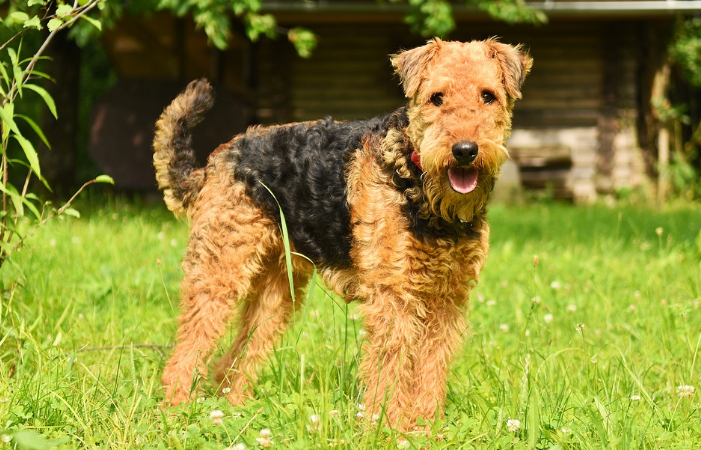 Just like most other terriers, the Airedale Terrier has a “broken” coat that consists of a soft, insulating undercoat and a harsh, wiry topcoat. Show dogs need extensive grooming, but ordinary pets only need regular brushings and to have their coat plucked twice a year. The beard should however be washed on a daily basis since it tends to get dirty after meals. Show dogs will normally be groomed by stripping, a procedure where a small knife with a serrated edge is used to pull out loose hair from the coat. An Airedale Terrier coat that is kept stripped sheds little or no hair, while non-stripped coats tend to shed quite a lot, even if they are trimmed and brushed.

Airedale Terrier dog breeding dates back to the mid 1800s when working class people living in Yorkshire developed the breed by crossing the traditional English rough-coated Black & Tan Terrier with the Otterhound. The Otterhound is an old British dog breed with Bloodhound ancestors that were once used to hunt utter and therefore has webbed feet, a love of water and an oily, rough, double coat. The result of crossing terrier with Otterhound was a dog that was too tall to “go too ground” like normal working terriers, but that was excellent at every other task that terriers normally carried out and could be used to hunt otter. Due to the infusion of hound blood, Airedale Terrier dog breeding had managed to create a dog that could both scent game and tackle big animals. In 1886, the Airedale Terrier was recognized by the Kennel Club of England.

The Airedale Terrier dog price varies from breeder to breeder, and it is always important to investigate what you actually get for your money. Has the puppy been examined by a vet, de-wormed and vaccinated? Has the parents been screened for hereditary disease? Is the breeder a reputable one known to deliver well-socialized puppies? Going for the lowest Airedale Terrier dog price without investigating why it is low can turn out to be a costly decision in the long run.

Here at Dog Breed HQ, you can find a wide range of information about alls sorts of dog breeds and even some mixed breeds.