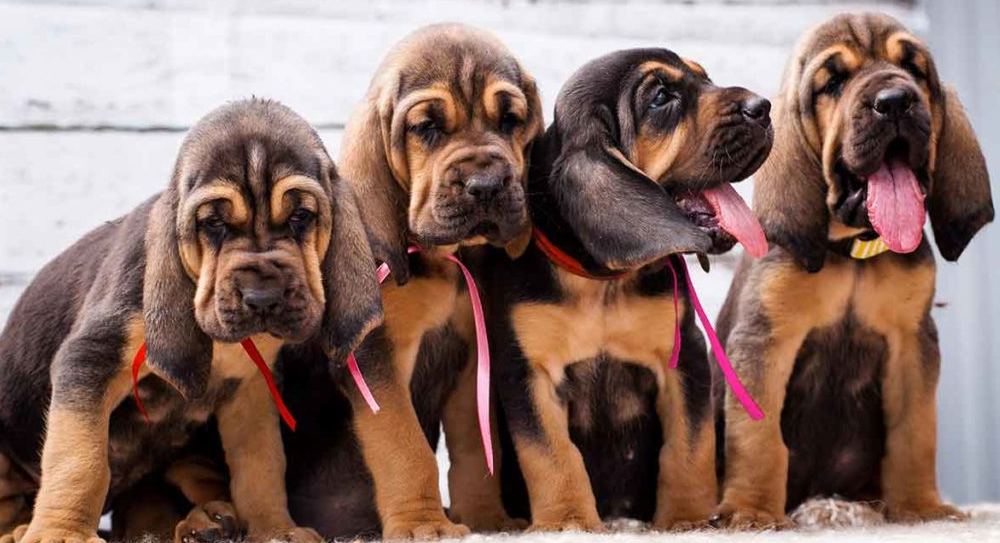 The Bloodhound is a large breed of dog famous for its amazing sense of scent and ability to track and find human beings. It is for instance used to locate missing persons and escaped convicts. Contrary to many other scent hounds, the Bloodhound can follow scents that are many hours or even days old. In this article, you will find a lot of fascinating Bloodhound dog information. Did you for instance know that this breed is also known as the St. Hubert Hound? According to legend, the original Bloodhound dog breeders were monks at the St. Hubert Monastery.

The Bloodhound has a smooth, shorthaired coat that is easy to groom and the most time consuming part of proper Bloodhound dog care is instead to keep their big ears and drooping eyes clean and free of infection. The coat should be groomed with a hound glove, and baths should only be carried out when absolutely necessary. Bloodhounds have a distinctive odour but frequent baths is not a good way of trying to milder this, since baths can cause dry skin and listless coats. The Bloodhound dog is an average shedder.

The Bloodhound is an independent breed with a will of its own and this must be taken into account during Bloodhound dog training. Its strong tracking instinct makes it determined and focused. If you want to own a Bloodhound, you have to be firm and consistent and make your dog trust you as the pack leader. With proper Bloodhound dog training, this dog is a relaxed, dependable and highly affectionate creature. Without proper training and exercise, it can turn into a quite a troublesome dog. The Bloodhound dog loves to follow a scent rather than catch or kill, and it will love any form of training that involves using its nose.

According to legend, Bloodhound dog breeding started out around 1000 AD when monks living at the St. Hubert Monastery in Belgium developed a dog with sensationally strong tracking skills. What we do know for a fact is that the breed was developed in this area, i.e. in modern day Belgium or France, and that it can trace its ancestry back to excellent scent hounds like the Swiss Jura Hound and the Bavarian Mountain Hound. Even though there is a lack of written reports regarding historical Bloodhound dog breeding, we can see these dogs in numerous European paintings.

Just like many other big breeds, the Bloodhound is prone to hip dysplasia. When purchasing a Bloodhound, it is important to stick to serious Bloodhound dog breeders that screen their dogs for hip dysplasia and other forms of hereditary disease, otherwise you will greatly increase the risk of getting a dog that requires extensive medical care.

The Bloodhound dog price varies from breeder to breeder, and it is always important to investigate what you actually get for your money before you make a purchase. You should for instance make sure that the puppies have been vet-checked, de-wormed and vaccinated prior to being delivered to you. Simply opting for the lowest Bloodhound dog price without doing any investigation as to the reputability of the breeder can be a very expensive decision in the long run.

The Boxer dog is a medium-sized, stocky dog breed with short hair and a square-jawed muzzle.