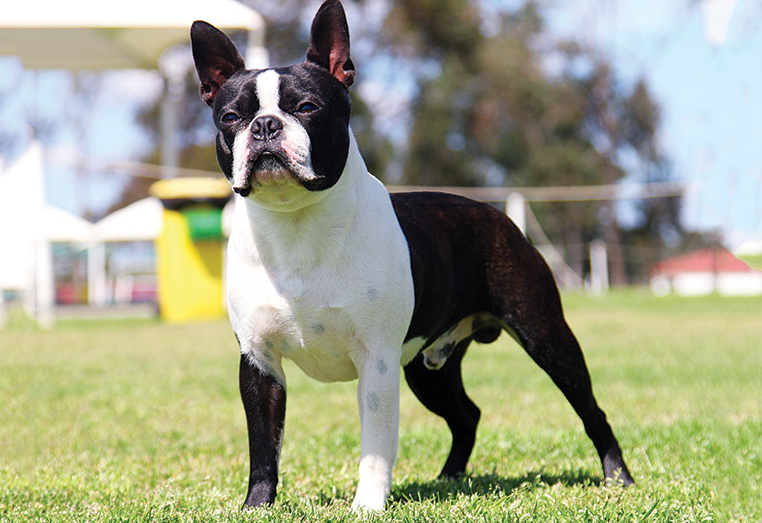 This article is filled with Boston Terrier dog information about this all American furry friend. The Boston Terrier breed was created by Boston resident Robert C. Hooper who purchased a cross between an English Bulldog and an English White Terrier at some point during the later half of the 19th century. Robert C. Hooper bred his dog – which got the name Hooper’s Judge – with a smaller female to bring down the size, and one of the resulting puppies was then bred to yet a smaller female. This offspring was then subsequently bred with French Bulldogs. The Boston Terrier breed was first shown in Boston in 1870 and the American Bull Terrier Club was created in 1889. In 1893, the name was changed to the Boston Terrier Club.

Since the Boston Terrier has a short snout and an elongated palate, it is prone to snorting, snoring, and the so called “reversed sneeze”. If your dog gets exited or over-heated and starts to snort and gasp for air, it is best to calm or cool it down. These “attacks” are not dangerous and your dog will not suffocate, but it can be a frightening experience for the terrier. Sometimes rubbing the throat to induce swallowing can stop the reversed sneeze. An important part of Boston Terrier dog care is to protect your dog from excessive heat and harsh cold weather, and refrain from too demanding forms of exercise. Boston Terriers are also prone to eye injuries since they have flat faces with protruding eyes, and it is a good idea to establish a contact in advance with a qualified veterinarian so that you know exactly what to do if your Boston Terrier sustains an eye injury.

Boston Terriers have a tendency to dislike being told what to do, and you must therefore be even more stubborn than you dog during Boston Terrier dog training. Even basic Boston Terrier training, such as housebreaking, will usually require a lot of persistence from the owner. Even with consistent crate training, it can take up to six months for a Boston Terrier to become fully house trained.

According to the American Kennel Club standard, the aim of Boston Terrier dog breeding should be to develop intelligent, friendly and lively dogs with an excellent disposition. The coat should be short and smooth, with a fine texture. The breed is divided into three classes: under 15 pounds, 15 pounds and under 20 pounds, 20 pounds and under 25 pounds. Regardless of weight, the length of the legs must be in balance with the length of the body and give the Boston Terrier a sturdy, square appearance.

When you choose between the available Boston Terrier dog breeders, it is important to stick to serious and knowledgeable ones that strives to promote good health in the breed. The Boston Terrier breed is prone to several health problems, including luxating patellas, heart murmur, cataracts, cherry eye, deafness and allergies. Some Boston Terrier dog breeders focus solely on outer appearance, while others focus solely on producing as many puppies as possible to make a lot of money, and both types of breeders should be avoided since their breeding strategies increase the chance of health problems and unstable temperaments. Unfortunately, neurotic, aggressive and hyperactive Boston Terriers are today all too common; partly due to genetic factors and partly due to poor socialization. You can greatly decrease the risk of getting such a dog buy purchasing from knowledgeable and serious Boston Terrier dog breeders only.

The Boston Terrier dog price varies a lot and it is hard to give any general guidelines. The most important thing is instead to ask what you actually get for your money. Has the Boston Terrier breeder paid to have the puppies vet-checked, vaccinated and de-wormed? Are the parents healthy and well cared for dogs with good ancestry? Has your puppy been treated well during the first imperative weeks of its life? The expected life span for a Boston Terrier is 13-15 years and trying to save a few bucks by purchasing from an insincere breeder is seldom worth it in the long run.