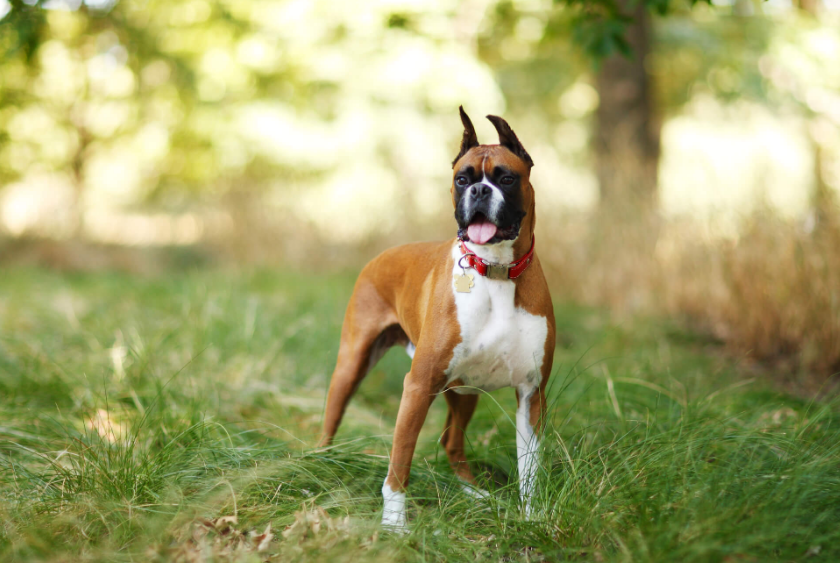 The Boxer dog is a medium-sized, stocky dog breed with short hair and a square-jawed muzzle. They are renowned for being excellent family dogs, but are also utilized as guarding dogs and service dogs. Boxer dogs have exceptionally strong jaws and a powerful bite. The available Boxer dog information regarding the origins of the suggestive name “Boxer” is somewhat vague and subject to several interpretations. One theory is that is was earned from a particular tendency to start a fight by standing up on the hind legs and engage in some “boxing” with the front paws. This breed does however hail from Germany and it is hard to believe that German Boxer dog breeders would have chosen an English word for their dogs. The earliest German texts mentioning the word Boxer dates back to the 18th century and the similarly sounding words Buxn, Buchsen and Boxl all means “short (leather) trousers” in the Bavarian dialect.

As far as the coat goes, Boxer dog care should involve frequent grooming sessions with a soft brush since Boxers shed. If you want to enhance the natural sheen of the coat you can give your dog occasional rubdowns using a chamois cloth, but this is for purely aesthetic reasons, it is not necessary for the wellbeing of your Boxer.

Since the Boxer dog has a short coat it is not considered good Boxer dog care to leave the dog outside for any longer period of time in cold climates – this is a housedog. You should also keep a watchful eye over your dog during heat spells; the shortened muzzle of the breed makes hot weather problematic for Boxers.

Boxer dogs are very popular and according to American Kennel Club statistics from 2006, the Boxer dog was the 7th most popular breed in the United States with over 35,000 Boxer dogs registered that year. Before you go out and buy an adorable little Boxer dog puppy, there are however many things to take into consideration. The Boxer dog puppy is extremely charming, but are you prepared to care for an adult Boxer during the following 10-12 years? Boxer dogs can make extremely god pets, but only when properly cared for, trained and exercised.

The fact that you live in an apartment is not a problem if you want to get a Boxer dog puppy; young and adult Boxers alike can have great lives in apartments as long as they are kept by someone who takes them out on several walks a day and preferably also provides them with some free playtime in the park on a regular basis.

The Boxer dog puppy is not fully mature until it has reached an age of at least 2-3 years and is sometimes referred to as the Canine Peter Pan due to this long puppyhood and adolescence. The lively Boxer dog puppy must be given plenty of training and time to play to work off excess energy; otherwise it can become quite boisterous. Early socialization is also important if you want your Boxer dog to tolerate other dogs and pets well. Boxers tend to be patient as long as the other dog is small, but when they encounter larger dogs they can turn highly over-protective, territorial and dominating. This trait is especially strong in male Boxers.

Boxer dogs are friendly and active and can be trained for a wide range of purposes. Being naturally suspicious of strangers, they are often utilized as guard dogs and the military once used them as messenger dogs and pack carriers. In modern days, Boxer dog training has grown to encompass many other fields and Boxers are today used as guide dogs, therapy dogs, police dogs and service dogs. If you are interested in Boxer dog training beyond the basics, you can compete with your Boxer in obedience and agility trails.

Boxer dog training should start out at an early age since older Boxers are much more difficult to train. The Boxer dog is known for being stubborn and Boxer dog training must be carried out in a determined and persistent manner. You will most likely have more luck with praise than punishments, and Boxers dogs are known to respond very well to positive reinforcement.

The origins of Boxer dog breeding goes far back into history and its ancient ancestors are believed to be the Haz, a dog of Mastiff descent. Being a member of the Molosser group, it was definitely bred from the now extinct German Bullenbeiser which was used to hunt bear and wild boar in Germany. This impressive working dog could seize bear and wild boar and hold on until the hunters arrived. Over the years, the breeding of Bullenbeiser favoured faster dogs and as a result, the dog grew smaller and smaller. Eventually it would even get a new name – the Brabanter. Modern Boxer dog breeding started in the 19th century when the Brabanter was bred with the English Bulldog. In 1895, the Boxer made it to its first dog show in Munich and the first Boxer Club was founded the very next year. During the last years of the 19th century the Boxer was exported from Germany to other parts of Europe and the breed reached the United States around the turn of the century. In due course, Boxer dog breeding became popular in the U.S. and the American Kennel Club recognized the first Boxer champion in 1915. Boxer dog breeding really took off after World War II when returning soldiers brought back Boxer dogs that had served them as military dogs in the war.

Since the Boxer dog is such a popular breed there are numerous Boxer dog breeders out there, and unfortunately not all of them are serious and dedicated to what is best for the breed and the individual dogs. When you chose among the available Boxer dog breeders it is important to stay clear of “puppy-mills” and opt for breeders that strive to develop healthy and well socialized Boxer dogs. Only healthy dogs should be used as parents, since certain health problems have become common in the breed. Boxers are inclined to develop hearth conditions, including Aortic Stenosis and Arrhythmogenic Right Ventricular Cardiomyopathy. The latter one is actually commonly referred to as “Boxer Cardiomyopathy” due to its high level of occurrence in the breed. In addition to this, Boxers are prone to cancer, hypothyroidism, degenerative myelopathy (an neurological disease) and hip dysplasia. Poor Boxer dog breeding is also known to sometimes result in entropion, a condition where the eyelid is malformed.

The Boxer dog price varies a lot from breeder to breeder, and also from region to region. When comparing different Boxer dog price tags, it is important to find out what you actually get for your money. Are you buying from a reputable Boxer dog breeder known to produce healthy dogs? Is the puppy well socialized? Has the breeder paid to have the Boxer dog puppy vaccinated, de-wormed and examined by a qualified veterinarian? A healthy Boxer dog will live for roughly 10-12 years and trying to save some money on the initial purchase price is certainly not a financially sound thing to do if it means ending up with an unhealthy Boxer dog puppy that needs to be put to sleep for its own good or undergo extensive medical procedures. A high Boxer dog price does however not automatically equal high quality. You always have to do your homework and check up the Boxer dog breeder before you make any decisions.