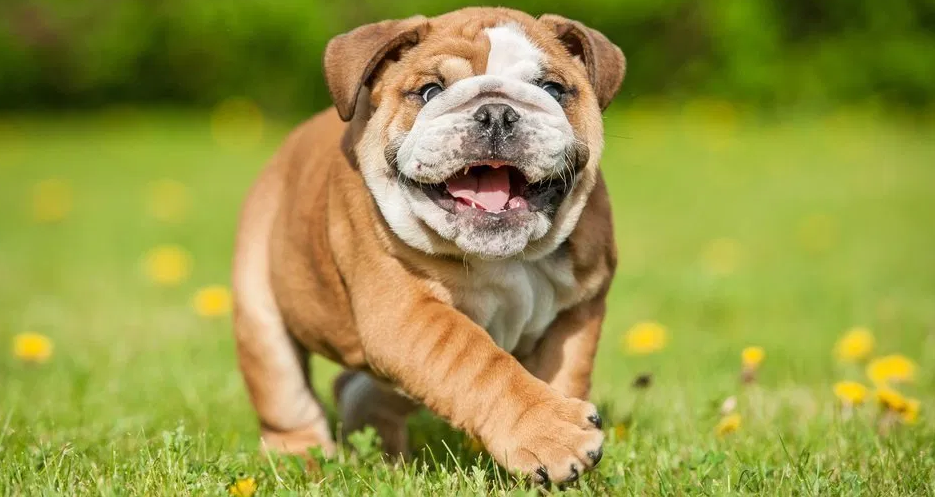 The Bulldog, also known as the English Bulldog or the British Bulldog, is a docile, friendly and loyal dog that hails from British fighting dogs. Today, the Bulldog is a generally peaceful and defensive creature since breeders have worked actively to remove aggressiveness from the breed to make Bulldogs more suitable as pet dogs. In this article, you can find a lot of interesting Bulldog information. Did you for instance know that Yale University has a Bulldog mascot? He is called Handsome Dan and is the oldest-running traditional live mascot in the United States.

The Bulldog has a short, low-maintenance coat and does not need a lot of exercise. The most time consuming parts of proper Bulldog care are instead Bulldog training and Bulldog health. The Bulldog has been selectively bred for hundreds of years and it is today a very odd creature that requires a lot of human attention to stay healthy. You have to clean the folded face of your dog once a day to prevent infections and regular teeth brushing, ideally once a day, is also recommended. Use a soft toothbrush and ask your vet for advice regarding which type of toothpaste to use. In some specimens, the tail is tight to the body and such a tail must be cleaned underneath on a regular basis to prevent infection. Check the paws of your Bulldog during each grooming session since this breed is prone to interstitial cysts between the toes. Other common health problems associated with the breed are allergies and cherry eye. Just as in many other breeds, older Bulldogs can develop hip problems. Bulldogs can find it difficult to breathe when they become to hot or overly excited, and keeping your dog calm and cool is therefore an essential part of good Bulldog care.

The Bulldog puppy is truly a bundle of joy, but before you decide to bring one home you should ask yourself if you will be willing to devote enough time and energy to your dog during the coming 8-12 years. Bulldogs are also known to require veterinary attention once in a while, and are therefore not a good choice if you are on slim budget.

Getting a Bulldog puppy is a good choice if you want a dog that is satisfied with shorter walks around the neighbourhood – this dog will not appreciate heavy exercise. This doesn’t mean that you should let your Bulldog spend its entire life napping on the sofa; regular walks combined with a healthy diet are imperative if you want to avoid obesity and health problems related to heart and lungs. Getting a Bulldog puppy is also a great idea if you want a dog that rarely barks and will not mind living in a small apartment. If you on the other hand dislike dogs that drool, snore and snort, a Bulldog puppy is not the right choice for you. Some adult Bulldogs do become so called “dry-mounts”, but this is impossible to tell in advance.

Bulldogs tend to be very stubborn, and the key to successful Bulldog training is usually to be even more stubborn than your dog. Even if you do not plan on taking your canine friend to the obedience Olympics, you still have to provide it with basic Bulldog training, e.g. housebreaking and leash training. Bulldog training must be patient and consistent, and using food normally makes it much easier.

Bulldog breeding has taken place for hundreds of years, and the term Bulldog was first used around mid 16th century. During this period, it was applied to a wide range of different fighting dogs. In pre-Victorian England, the Old English Bulldog was a strong, fast and agile dog used for bullfights, but when the sport declined due to the passage of the Cruelty to Animals Act in 1835, the breed became extinct. Bulldog breeding for pet purposes continued, but those dogs retained very little of the speed and agility shown by their forefathers. In 1891, two very different Bulldogs competed for best in show: the athletic King Orry who had the agile look of the old Bulldogs and Dockleaf who was small, short-legged and heavy set. Dockleaf won and became the role model for future Bulldog breeding. In recent days, several Bulldog breeding programs has aimed to recreate the old Bulldog variety. Olde Englishe Bulldogge, Victorian Bulldog, Continental Bulldog, Renascence Bulldog, and Dorse Old Tyme Bulldog are all examples of such recreations. None of them are currently recognized by the American Kennel Club.

According to the American Kennel Club standard, Bulldog breeders should strive to create kind, resolute and courageous Bulldogs that are neither vicious nor aggressive. The ideal Bulldog should exude an air of kindness and dignity. When it comes to general appearance, the Bulldog breeders should develop a medium sized Bulldog with a massive short-faced head and sturdy limbs. The coat should always be short, flat and straight and of a smooth and glossy fashion. Bulldog breeders should also strive for dogs with soft and loose skin, especially at the head, neck and shoulder.

The Beagle is a medium sized dog breed belonging to the hound group.

The Brittany dog was originally bred for hunting and is an excellent bird dog.