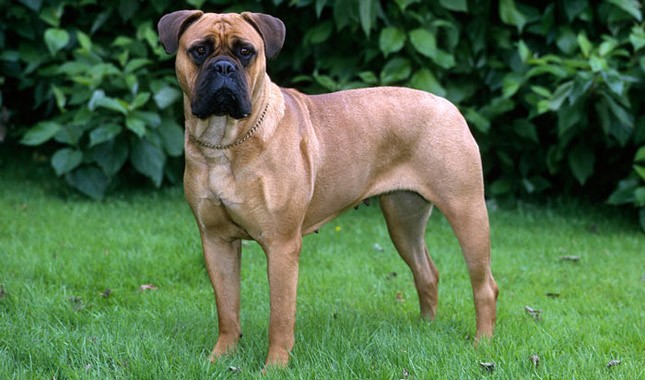 The Bullmastiff dog was created by crossing 60% Mastiffs with 40% Old English Bulldogs (not the modern variety of Bulldog) and the result was a heavy, massive and courageous dog. Records of Mastiff Bulldog type dogs date back as far as to the late 18th century. In this article, you will find a lot of interesting Bullmastiff dog information. Did you know that the Bullmastiff was bred to sneak up on poachers? Due to this, the Bullmastiff barks much less than most other breeders. When it wants to, it is however capable of producing an exceptionally dark and hollow bark that definitely gets the attention of anyone nearby.

This breed has a short-haired, slightly rough coat that is easy to maintain and owners are not required to spend a lot of time on Bullmastiff dog care as far as the coat goes. Use a comb and a firm bristle brush, and only shampoo when absolutely necessary. The Bullmastiff is not a heavy shedder. The nails should be frequently trimmed and checking the feet for problems should be a part of your everyday routine since the feet of a Bullmastiff carries a lot of weight.

The cute little Bullmastiff dog puppy is hard to resist, but before you take one home you should ask yourself if you are both willing and capable of providing this dog with everything it needs for the next 10 years. You should also determine if the Bullmastiff is the perfect breed for you. Getting a Bullmastiff dog puppy is a good idea if you want a huge and sturdy dog that needs only moderate exercise. Getting a Bullmastiff dog puppy is a poor idea if you do not like dogs that snort, snore, drool and fart. You should also keep in mind that this is a powerful and strong-willed breed that needs a lot of training to become a good pet dog, and the owner must be both firm and consistent. It can be quite aggressive towards other animals and sometimes even toward people.

Compared to most other popular guard dogs, the Bullmastiff is somewhat resistant to obedience training and you must be prepared to spend a lot of time on Bullmastiff dog training. The Bullmastiff is also renowned for easily becoming overly protective of its human family.

Early socialization is an important part of proper Bullmastiff dog training since Bullmastiffs that are not well-socialized can be aggressive towards animals and humans alike. When provided with proper Bullmastiff dog training, this breed is a compliant and affectionate creature that will stay docile unless seriously provoked. It should be noted that even if a Bullmastiff decides to attack someone, it will rarely bite that person. The Bullmastiff was bred to find poachers, knock them over and hold them until its master arrived. It will therefore normally be satisfied with knocking over intruders and then simply wait for its keeper to take care of the rest.

When getting Bullmastiffs, it is important to buy from reputable Bullmastiff dog breeders that strive to create well-socialized dogs and minimize the risk for hereditary disease. Examples of ailments associated with the breed are hip dysplasia, elbow dysplasia, entropion, hypothyroidism, and progressive retinal atrophy. Another risk with buying from less reputable Bullmastiff dog breeders is that you may get a dog that has not been properly socialized during the imperative first weeks of its life.

The Bullmastiff dog price varies from breeder to breeder and it is always important to investigate what you actually get for your money instead of simply going for the lowest possible Bullmastiff dog price. You should for instance find out if the Bullmastiff puppy that you are being offered will be examined by a qualified vet, vaccinated and de-wormed prior to delivery.

The Boxer dog is a medium-sized, stocky dog breed with short hair and a square-jawed muzzle.