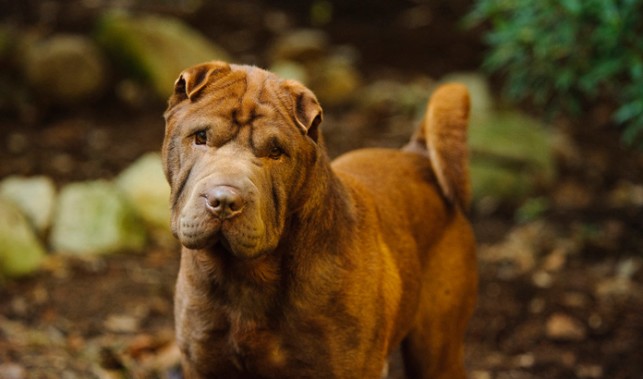 The Chinese Shar-Pei is a breed of dog native to the Guangdong province where it was used as a fighting and guarding dog. It can be recognized on its deep wrinkles, blue-black tongue and short, rough coat. In its native country, its name actually means “sand skin”. Shar Pei puppies are born with loads of “extra skin”, but as they grow bigger they grow into their skin and the wrinkling becomes less pronounced. In this article, you will find a lot of interesting Chinese Shar-Pei dog information. Did you for instance know that the Chinese Shar-Pei was once named as one of the rarest dog breeds in the world by Time magazine and the Guinness Book of World Records?

As far as coat maintenance come, the Chinese Shar-Pei dog comes in three coat varieties. The so called “horse coat” is very short and prickly and if you have sensitive skin it can become irritated after petting your dog. The “brush coat” is longer, approximately one inch, and very thick. The “bear coat” is very heavy and resembles the coat found on a Chow Chow dog. All three varieties shed, but the horse coat sheds less than the other two.

During Chinese Shar-Pei dog training, it is important to keep in mind that this dog was created to be a fighting and guarding dog. It is intensely loyal to its keepers and has a body that is perfectly shaped for defending its family. The ears are small, the eyes are deep-set and when another dog bites the Sharp-Pei, the aggressor only ends up with a mouthful if skin while the Sharp-Pei takes advantage of its wrinkles, turns around and bites back. With the right type of Chinese Shar-Pei dog training, this dog is a great companion and family dog, but with improper training or no training at all it can become a serious problem.

Chinese Shar-Pei training must involve socialization training, because this breed is naturally suspicious and aggressive towards strangers, including other animals. Early Chinese Shar-Pei dog training should involve meeting a lot of nice strangers, so that the Shar-Pei can learn how to recognize the normal behaviours of “good guys”.

In China, Shar-Pei dog breeding has taken place since antiquity and DNA analysis has showed that this is one of the oldest dog breeds in the world. Chinese Shar-Pei dog breeding outside China has however been uncommon until quite recently, and the American Kennel Club did not recognize the breed until 1991.

If you follow the American Kennel Club standard, the aim of Chinese Shar-Pei dog breeding is to create alert and compact dogs of medium size. Loose skin should cover the head and body; the ears should be small and the muzzle somewhat “hippopotamus-shaped”. In puppies, this loos skin should be highly abundant, while adult dogs can have the feature limited to head, neck and withers.

When purchasing a Chinese Shar-Pei dog, it is very important to stick to serious Chinese Shar-Pei dog breeders that know what they are doing. Irresponsible breeding will increase the risk of several health problems in the breed, including entropion – a condition where the eyelashes curl inwards, causing severe pain and eventually blindness if left untreated. Other examples of health problems associated with the breed are amyloidosis (which leads to renal failure), allergies and Shar Pei fever.

The Chinese Shar-Pei dog price varies a lot from breeder to breeder and the important thing is to find out what you actually get for your money. Is the breeder using high-quality parents of good ancestry, or simply the Shar-Pei dogs he or she happens to have around? Has the breeder paid to have the parents screened for hereditary disease and examined by a qualified vet? Has your puppy been vet-checked, vaccinated and de-wormed? Is the Chinese Shar-Pei dog price high because the breeder has invested a lot of money in the development of high-quality dogs, or is it high because the seller is the greedy owner of a puppy mill?

The Cairn Terrier is one of the oldest terriers and also one of Scotland’s earliest working dogs.