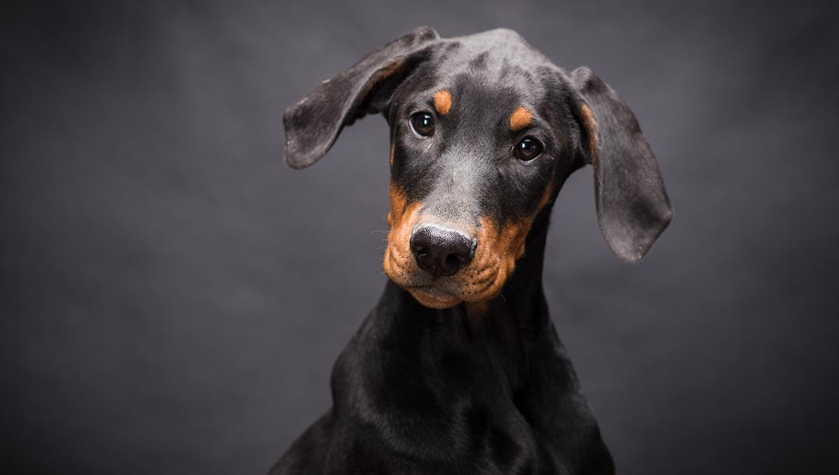 When it comes to coat maintenance, the amount of required Doberman Pinscher dog care is very low. Brushing or wiping the coat with a damp cloth once in a while is enough, and this breed is also known to shed very little. The nails should be trimmed every 2-3 weeks.

Providing your dog with large amounts of exercise is an essential part of Doberman Pinscher dog care since this breed will suffer physically as well as mentally if forced to a sedentary life style. You should also give your dogs plenty of safe toys; preferably extra-strong ones that can handle Doberman chewing.

The first Doberman Pinscher dog breeders lived in Germany at the end of the 19th century and the very first breeder was a man named Karl Friedrich Louis Dobermann. Herr Dobermann was a tax collector and needed dogs that could defend him when he travelled through dangerous areas. When he created the Doberman Pinscher, he focused on strength, intelligence, loyalty, and ferocity. After his death in 1894, the breed was named Dobermann Pinscher in his honour. Half a century later, German Doberman Pinscher dog breeders decided to drop the word pinscher from the name, since pinscher is the German term for terrier and they felt that the dog was no longer a real terrier. Within a few years, the British breeders had done the same.

Exactly which breeds that were used by Herr Dobermann and the original Doberman Pinscher dog breeders is not known, but most experts agree that the Doberman Pinscher is the result of mixing at least four of the following breeds: Rottweiler, German Pinscher, German Shorthaired Pointer, German Shepherd, Weimaraner, Beauceron, Thuringian Shepherd Dog, Great Dane and Manchester Terrier. There is also a documented cross with the black Greyhound.

When you compare the Doberman Pinscher dog price offered by different breeders, it is important to check what you actually get for your money. You should for instance stick to reputable Doberman Pinscher breeders that strive to minimize the risk for hereditary disease. Examples of common health problems in this breed are dilated cardiomyopathy, wobbler disease, von Willebrand’s disease, glaucoma, progressive retinal atrophy, and hip dysplasia. The average life span of a Doberman Pinscher is 10 years and trying to save a few bucks on the Doberman Pinscher dog price by purchasing from a puppy mill or other non-reputable breeder is not worth it, since you increase the risk of ending up with an unhealthy, unstable dog that has not been properly socialized and cared for as a puppy.