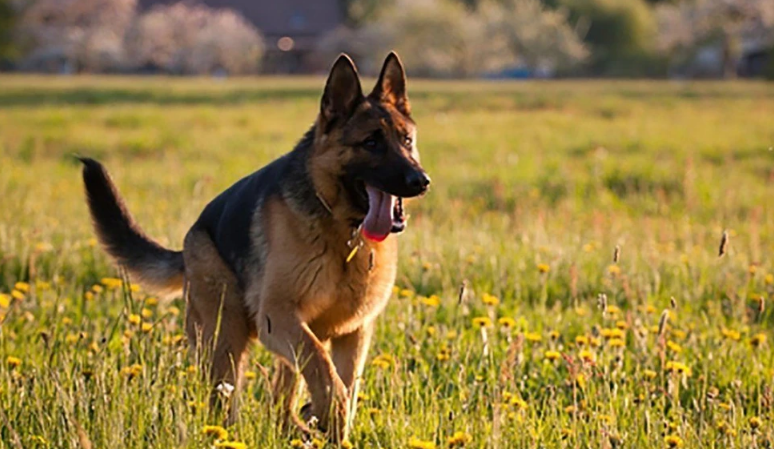 The German Shepherd dog is one of the most well known breed of dogs, since it is commonly kept not only as a pet, but as a working dog as well. Traditionally used as a herding dog, the German Shepherd is today utilized in our modern society where it functions as a police dog, bomb dog, guard dog, search and rescue dog, military dog, and anti-narcotics dog. It can also be trained as a therapy dog or become a guide dog for the blind. In this article, you will find a lot of interesting German Shepherd dog information. Did you for instance know that this breed is commonly known as the Alsatian dog or Alsatian Shepherd in the United Kingdom, Ireland and the Commonwealth?

The German Shepherd sheds hair year round, but a quick daily brushing is enough to keep the coat looking nice and prevent too much hair from ending up in the rest of the home. Seasonally, this breed turns into a very heavy shedder so you have to be prepared to spend a little more time on German Shepherd dog care during such periods. Earlier on, long-haired and wire-haired German Shepherds could be exhibited too, but today most Kennel Clubs allow the short-haired variety only in dog shows. Bathing once or twice per year is enough; more than this can cause dry skin.

German Shepherd dog breeding has today resulted in several different GSD lines. Before you get a dog, it is therefore important to investigate which specific line the breeder promotes. The three major lines are the working line, the international show line and the North American show line. Behaviour, appearance and ability normally vary a lot of between dogs from these different lines. When the aim is to create a great working dog, German Shepherd dog breeding will naturally focus less on outer appearance and more on abilities, and vice versa. In North America, German Shepherd dog breeding of show dogs has traditionally promoted a more noticeably sloped back and sharper hock joint angles than what can be observed in international GSD show dogs.

Since the German Shepherd is such a popular dog, it is unfortunately a very popular breed among puppy mill owners that strives to produce as many puppies as possible without caring about the risk for hereditary disease, the importance of early socialization and so on. There are also a lot of perhaps well-meaning but still irresponsible German Shepherd owners that allow their dogs to breed without first checking up their ancestry and paying to have a qualified vet screen them for hereditary disease. As mentioned above, overly aggressive or otherwise mentally unstable German Shepherd dogs are often the result of poor breeding, improper socialization and inadequate training. When getting a German Shepherd, it is therefore extremely important to stick to responsible German Shepherd dog breeders that strive to develop healthy and well-socialized dogs.

The German Shepherd dog price varies a lot, and it is very important to check what you actually get for your money. Simply going for the lowest possible German Shepherd dog price without investigating why it is low can be an expensive choice in the long run, since you risk getting a dog prone to hip dysplasia, elbow dysplasia, skin allergies, von Willebrand’s disease, and eye and ear problems.

The Dachshund is a short-legged dog with an exceptionally elongated body.