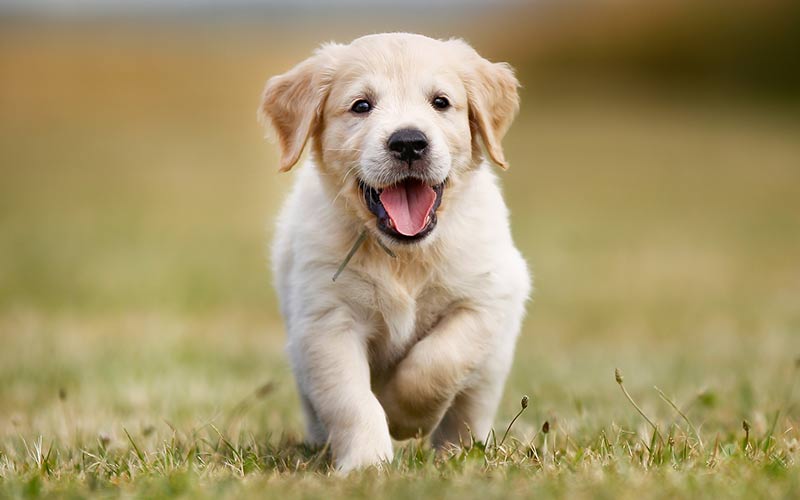 The Golden Retriever was originally developed to retrieve downed fowl and is today one of the most popular dog breeds in the world, especially among families with young children. The Golden Retriever is easy to handle, have a happy disposition and will normally go along well with both children and other dogs. It needs plenty of attention to stay in high spirits and should not be left alone too much since it is a very social creature. Goldens are not commonly used as watch dogs, since they are so happy and friendly towards all human being – intruders included. They will however bark when startled and can be thought to bark when someone enters the premises.

Golden Retrievers are not as prone to obesity as Labrador Retrievers, but they still need regular exercise to stay happy and healthy. As with any animal – humans included – too much food and too little exercise will have an adverse effect on overall health. When your Golden Retriever grows older and becomes less active you will need to serve it smaller amounts of food or switch to food specially designed for elderly dogs.

Since the Golden Retriever is such a popular breed, it is commonly produced by puppy mills and disreputable backyard breeders. It is therefore very important to purchase your Golden Retriever puppy from a trustworthy breeder that strives to breed out genetic disorders and raise healthy and well socialised dogs with a stable temperament.

The typical Golden Retriever puppy is quite an unruly little fellow with plenty of energy and a highly inquisitive disposition. It must therefore be trained to understand the difference between allowed and forbidden activities. When the Golden Retriever puppy grows up, it will turn into a very patient dog, while still retaining its youthful cheerfulness and energy.

Do not be surprised if your Golden Retriever puppy doesn’t like to play fetch; many Goldens will not start fetching until they have matured into adult dogs.

Just as the name suggests, the Golden Retriever will instinctively love to retrieve and can actually become sad and frustrated if it is never allowed to carry out this task. If you do not hunt, get a stick, a ball or a flying disc for your dog and play fetch on a regular basis. Your Golden Retriever will also need to have toys that it is allowed to carry around without getting scolded for it. Golden Retriever training can preferably include teaching your dog to fetch things for you, such as the newspaper or your purse.

The Golden Retriever price varies a lot from breeder to breeder. A high Golden Retriever price does not automatically mean that you will get a high quality dog, but an unusually low price should cause suspicion. Due to irresponsible Golden Retriever breeders, hip dysplasia is today very common in the breed. When you chose a breeder, stick to those who can show that the parents of the puppies have been examined by OFA, PennHIP or similar for hip disease. Keep in mind that an inexpensive Golden will turn into an expensive – and heart breaking – purchase if you have to put it down due to serious illness. Paying a somewhat higher Golden Retriever price is a good investment if the seller can provide you with proof that the parents as well as the puppies have been provided with veterinary care and been examined for common ailments.

The German Shorthaired Pointer (GSP) is a versatile and independent hunting dog that needs a lot of exercise to stay healthy and happy.

Bichon Frisé means “curly lap dog” in French, and is a very good name for this small, friendly and cuddly breed.