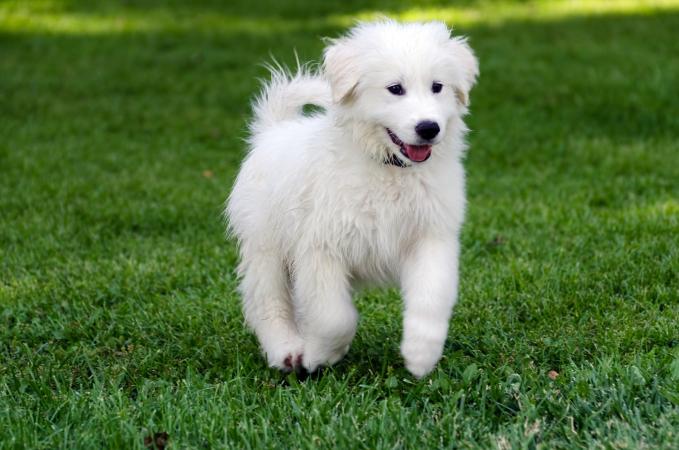 These livestock guarding dogs are known as Pyrenean Mountain Dogs in the United Kingdom and Great Pyrenees in the United States. The fur is often white, but only one in four has a completely white coat. The other ones have white coats that are decorated with grey or tan shades around face, ears and sometimes on the body as well (these dogs are called “blaireau”). Young specimens are normally gray with tan markings. In this article, you will find a lot of interesting Great Pyrenees dog information. Did you know that all Great Pyrenee dogs have a double dewclaw on the hind legs? Some Pyrenees will even have more than two dewclaws, but this is not desirable and should be removed by a qualified vet.

The Great Pyrenees is adapted to cold conditions at high altitudes and has a long, double coat that needs to be brushed regularly to stay in good condition. When the dog is shedding its undercoat, you have to spend even more time on Great Pyrenees dog care. An advantage with the Great Pyrenees coat is that the outer coat does not mat, and caring for it is therefore fairly easy. Frequent baths with shampoo are not recommended.

The Great Pyrenees dog puppy is an adorable little fellow, but before you decide to purchase one you should sit down and determine if you are willing and able to care for a dog for the next 10 years or even longer. You should also ask yourself if the Great Pyrenees is the ideal breed for you. Originally bred to guard livestock, this breed is naturally suspicious against strangers and has strong protective instincts. It loves to work and getting a Great Pyrenees dog puppy is an excellent idea if you need someone to guard your sheep, goats, chickens, horses or similar. If you have no livestock you have to find other ways of keeping your Great Pyrenees dog active and entertained. Before you decide to get a Great Pyrenees dog puppy you should also keep in mind that this dog grows to be fairly big, it sheds a lot once a year, it requires a confident and steadfast pack leader, and it is quite an escape artist (fences has to bee at least six foot high and impossible to dig out under). When the Great Pyrenees hears un unfamiliar sound, it tends to respond with deep booming barks.

The Great Pyrenees is a guarding dog bred to work on its own without having to obey commands all day and this must be taking into consideration during Great Pyrenees dog training. It is affectionate, responds well to praise and is intelligent enough to grasp new commands within no time. It will however quickly grow bored if you repeat the same exercise over and over again. Obedience training and socialization should start at an early age. Even a properly trained Great Pyrenees should not be trusted off-leash when there is traffic or other dangers around, since its inquisitive nature makes it prone to suddenly darting off and leaving the owner behind.

According to the American Kennel Club standard, Great Pyrenees dog breeders should strive to create dogs that are elegant and beautiful. The outer coat should be long, flat and thick and there must also be an insulting undercoat. White should be the chief colour, but markings of grey, tan or badger is not considered a problem and there is no requirement for Great Pyrenees dog breeders to strive to keep their dogs pure white. The body of a Great Pyrenees dog should be well balanced and elegance of bearing and movement are important. When the dog moves around, you should clearly see that this is a working dog capable of guarding livestock on the cold, steep and windy mountain slopes of the Pyrenees.

Like many other breeds, the Great Pyrenees is prone to hip dysplasia. When purchasing a dog, it is important to stick to responsible and knowledgeable Great Pyrenees dog breeders that have their dogs vet-checked and screened for hereditary disease before using them for breeding purposes.

The Great Pyrenees dog price varies a lot from breeder to breeder, and investigating what you actually get for your money is important. It is for instance important to check if the puppy will be examined by a vet, vaccinated and de-wormed prior to being delivered to you.

The Golden Retriever was originally developed to retrieve downed fowl and is today one of the most popular dog breeds in the world, especially among families with young children.

The German Shorthaired Pointer (GSP) is a versatile and independent hunting dog that needs a lot of exercise to stay healthy and happy.