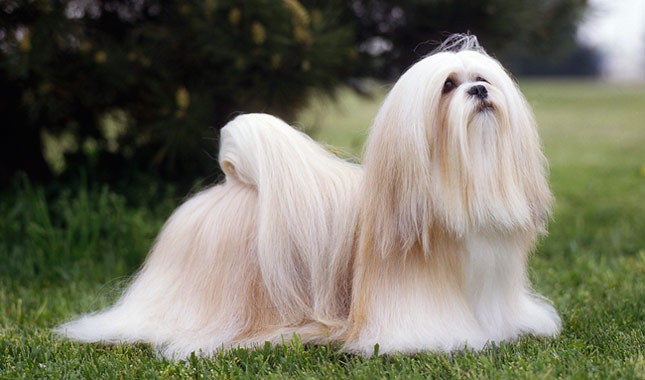 The Lhasa Apso is a small, yet sturdy, dog from Tibet. In the early 1900s, the first Lhasa Apso was brought to the United Kingdom by Mrs. A. McLaren Morrison. It would take three decades before the breed arrived to the United States, in the form of a present from Thubten Gyatso, the 13th Dalai Lama, to C. Suydam Cutting. It was originally registered in the Terrier group, but was transferred to the non-sporting group in 1959. In this article you will find a lot of fascinating Lhasa Apso dog information. Did you for instance know that the Lhasa Apso is one of the oldest breeds of dog in the world and that golden Lhasa Apso dogs are said to house the souls of the Dalai Lamas?

Lhasa Apso dogs do not require heavy exercise, but they do need extensive amounts of coat care. Proper Lhasa Apso dog care involves very frequent brushing; otherwise the coat of this breed will turn into a mess of mats and tangles. If you want to save some time, you can have your Lhasa Apso trimmed and keep the coat short and neat. If you decide to trim your dog, remember that it will become more sensitive to cold.

According to the American Kennel Club standard, the aim of Lhasa Apso dog breeding should be to develop gay and assertive dogs decorated with a very dense coat consisting of heavy, straight, hard hairs. The coat of a Lhasa Apso should never be wolly or silky, and it must be of good length. All colours are acceptable and it doesn’t matter if the dog has dark tips on its ears and beard or not. The size varies, but around 10-11 inches is recommended for dogs (i.e. males) and somewhat smaller for bitches. Since the Lhasa Apso is a watchdog, it should have a natural suspiciousness when it comes to strangers.

The Lhasa Apso is a small and extremely cute dog, and this has unfortunately made it rather popular among puppy mill owners and other insincere breeders. When purchasing a Lhasa Apso, it is very important to stick to responsible Lhasa Apso dog breeders that strive to promote good health in the breed and in each individual dog. The Lhasa Apso is generally a very healthy dog, but hereditary problems can lead to kidney disease and eye troubles.

The Lhasa Apso dog price varies a lot and providing any general guideless is difficult. The most important thing is to find out what you actually get for your money. You should for instance investigate if your puppy has been examined by a vet, vaccinated and de-wormed, or if you will be forced to pay for this yourself. Not having the puppies examined by a vet can also indicate the breeder does not really care about the health of the puppies. Lhasa Apso dogs are very long lived and live to be 15-18 years old. Trying to save a few bucks by purchasing from a low quality breeder is seldom worth it in the long run, and it can cost you money as well as heart ache when your dog has to be subjected to extensive medical care or put to sleep.

Contrary to what the name suggests, the Australian Shepherd was developed in the United States, not in Australia.

The Basset Hound is a short-legged hound famous for its remarkable sense of smell.