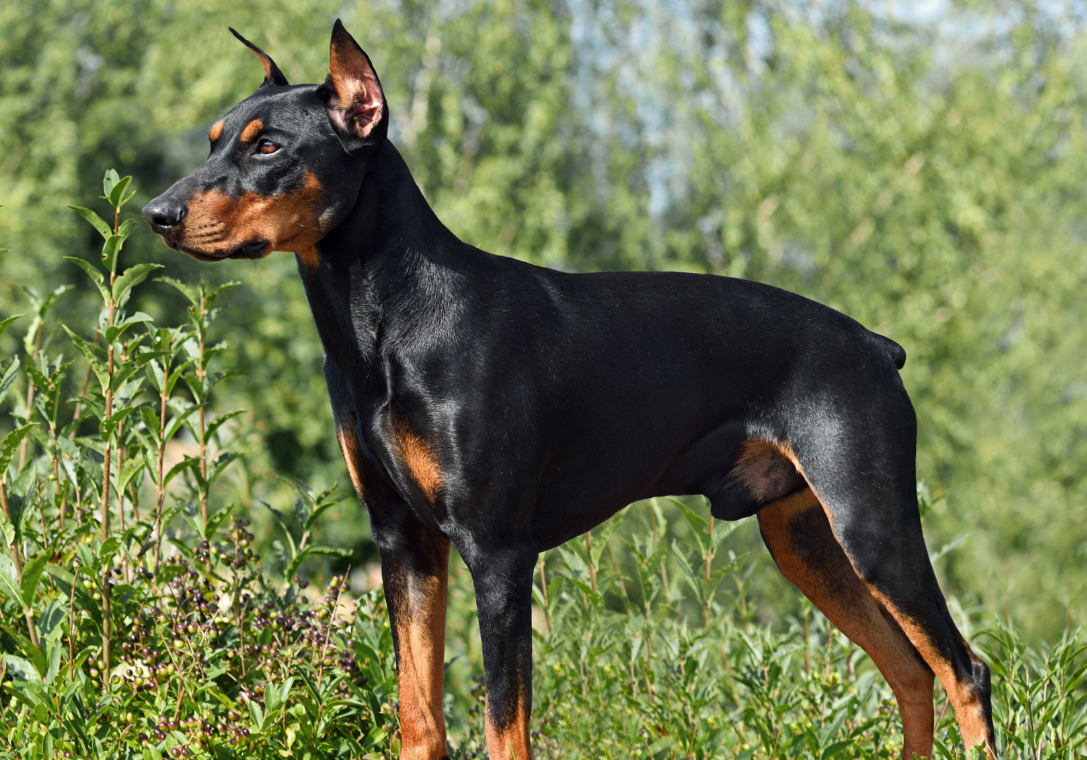 In this article you will find a lot of Miniature Pinscher dog information, including care recommendations and training tips. Originally bred to be a vermin exterminator for German farmers, the Miniature Pinscher is today a highly popular house pet and colloquially referred to as the Min Pin dog. Its German name is Zwergpinscher, which means Dwarf Pincher. Despite its similarity to the bigger Doberman Pinscher, it is not a Mini-Doberman. As a matter of fact, the Miniature Pinscher seems to have been around longer than the Doberman Pincher.

Miniature Pinscher dog care is not a very time consuming task, because the smooth, short-haired coat requires only basic attention. Give your dog a brisk brushing every few days to keep the coat clean and shiny, and trim the toenails roughly every two weeks. Wipe the area under the eyes as soon it gets mucky. Avoid frequent bathing since this makes skin and coat dry. If your Miniature Pinscher becomes dirty, it is better to wipe it clean with a warm, damp piece of cloth free of shampoo.

Since the short, smooth coat provides very little insulation, dog-clothes or shorter walks are recommended during excessively harsh weather. It is also very important to make sure that your Miniature Pinscher is completely dry after a bath before you allow it to go out in cold weather.

Being selectively bred to hunt vermin, the Miniature Pinscher will chase virtually any kind of small objects – including items such as bottle caps which can pose a choking hazard.

According to the American Kennel Club (AKC) standard, the aim of Miniature Pinscher dog breeding is the creation of proud, vigorous and alert dogs that are sturdy, well balanced and short-coupled. The coat should be smooth and naturally well groomed. Important Miniature Pinscher characteristics are hackney-like action, spirited presence, fearless animation and complete self-possession. The aim of Miniature Pinscher dog breeding should also be to develop dogs that are 11 to 11 ½ inches tall when measured at the highest point of the shoulder blades, but anything from 10 inches to 12 ½ inches are allowed.

Since the Miniature Pinscher is a small breed, it is often sold by puppy mills that produce endless amounts of “cute” dogs to earn as much money as possible with no or little regard to the welfare of the breed, the individuals dogs and the future owners. When purchasing a MinPin, it is very important to stick to responsible Miniature Pinscher dog breeders that strive to create healthy and well-socialized dogs. Knowledgeable and conscientious Miniature Pinscher dog breeders will strive to decrease the risk for hereditary disease in their dogs, such as Legg’s Perthes Disease and patellar luxation. (The latter is not always hereditary; it can also be caused by subsequent injury).