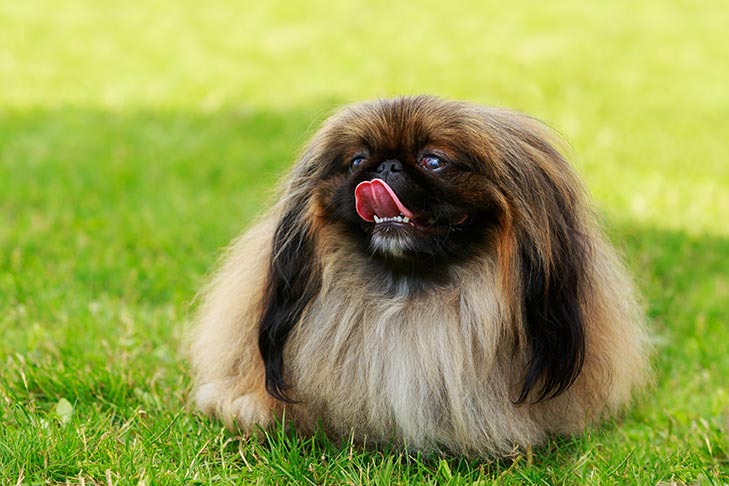 The Pekingese or Pekinese is an ancient Chinese dog breed that was specially bred to keep the Chinese Emperor and his imperial court company. The name Pekingese / Pekinese is related to the city of Peking (today known as Beijing) where the Forbidden City can be found. In China, these dogs are known as Foo. Unlike many other breeds that we keep as pets today, the Pekingese was never intended to hunt, herd, or retrieve fish nets – it was bred to be a lap dog from the start.

The Pekingese dog needs a lot of grooming and its coat will turn into a matted mess unless you are prepared to spend a lot of time on Pekingese dog care. This breed is also renowned for shedding a lot. Since the Pekingese was bred to be a pet only, and to resemble mythological Chinese guarding lions, focus was placed on appearance and temperament, not on physical health. Despite this, the early Chinese breeders created fairly healthy dogs and lot of the problems that we see in the breed today is the result of modern breeding. Preventing and caring for the various health problems that may occur is an important part of Pekingese dog care. The big, shallow-set eyes are for instance prone to injury and infection and you should be ready to devote considerable amounts of time to eye care. Disk problems, joint problems, skin problems and allergies are also fairly common. During whelping, most Pekingese dogs need veterinary aid. It is also important to keep your dog calm and cool, because the flat face causes breathing difficulties.

A Pekingese dog puppy is extremely cute and appealing, but before you decide to get one you should ask yourself if you will be able to care for this dog for the next 10-12 years or even longer? You should also determine whether this breed is the perfect breed for you. Can you handle a dog that snores, snorts, wheezes, snuffles and farts A LOT? Do you like spending a lot of time on coat maintenance? Is heavy shedding okay? Can you pay for its veterinary care? Getting a Pekingese dog puppy is a great choice if you want a small, yet chunky and sturdy, dog that does not require extensive exercise, sheep to herd, sleds to pull or birds to retrieve.

The Pekingese is strong willed and unlike breeds such as the Golden Retriever, it doesn’t live to please you. Pekingese dog training must be firm and consistent, and you must make your dog realise that you are the Chinese Emperor in this household. Basic obedience training should be started from an early age. Just like many other toy breeds, the Pekingese is rather slow when it comes to housebreaking and persistence and patience are required if you want to be successful in your Pekingese dog training.

According to the American Kennel Club, the aim of Pekingese dog breeding should be the creation of a well-balanced and compact dog with a heavy front and lighter hindquarters. The desirable temperament is that displayed of the traditional Pekingese: individuality, independence and directness. Its image should exude courage and dignity rather than toy breed delicacy. When you lift a furry little Pekingese dog, it can be surprisingly heavy for its size since it has such a muscular body. Pekingese dog breeding should however strive to create dogs weighing no more than 14 pounds as adults.

Until the Second Opium War in 1860, all Pekingese dog breeders worked for the Chinese Imperial Court. When the Forbidden City was invaded by Allied troops, five Pekingese dogs was captured by the Europeans and removed before the Old Summer Palace was burnt. Pekingese dog breeding could now start in the United Kingdom, from where it eventually spread to other parts of Europe.

The Pekingese dog price varies a lot and when you compare the price offered by different breeders it is important to investigate what you actually get for your money. The Pekingese dog is a small and extremely cute creature, and this is unfortunately two traits that make it very popular with puppy mills. These puppy mills produce endless amounts of Pekingese puppies without caring much for the health of the breed or the individual dogs. When buying a Pekinese, it is very important to stick to serious Pekingese dog breeders that strive to promote good health in the breed. You should also find out if your puppy has been vet-checked, vaccinated and de-wormed. A low Pekingese dog price can turn out to be an expensive one if you end up with an unhealthy dog.