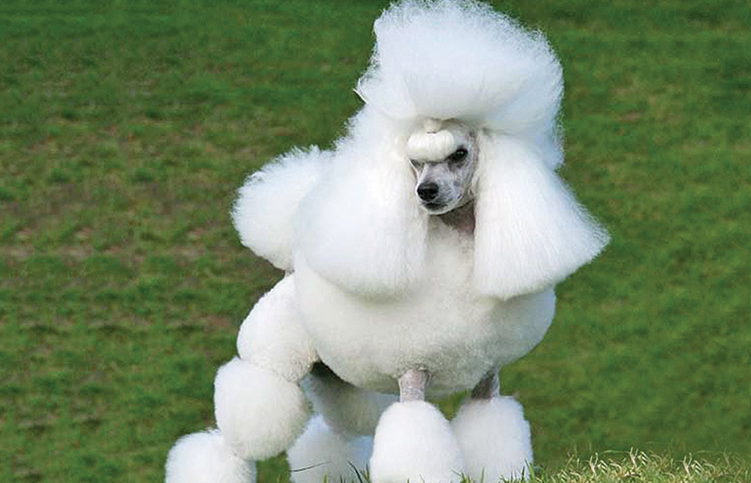 Originally bred as a gun dog that would retrieve ducks and other prey from the water, the Poodle dog is today one of the most popular dog breeds and is commonly seen in dog shows all over the world. Depending on height, the poodles are divided into three varieties: toy poodles, miniature poodles and standard poodles. You can find more Poodle dog information regarding height limits and standards further down in this article, under the headline “Poodle dog breeding”.

Poodles appear in many different colours and patterns and the Kennel Club rules regarding outer appearance varies significantly from country to country. Multi-coloured poodles can for instance participate in dog shows arranged by the United Kennel Club, but are disqualified by the American and Canadian Kennel Clubs. It is therefore important to obtain up to date Poodle dog information from the Kennel Club active in your particular part of the world if you are interested in dog shows.

The name poodle is derived from the German word Pudel, which in turn is short for Pudelhund which means “splashing dog”. This is naturally linked to the breed’s ability of retrieving ducks and other wild game out of the water. As a matter of fact, the german word Pudel is related to the English word puddle, and the poodle could therefore be said to be a “Puddle Dog”.

How much time you have to spend on Poodle dog care depends largely upon whether or not you want your dog to participate in dog shows. The American Kennel Club does for instance state that “A dog in any type of clip other than those listed under coat shall be disqualified.” Since these clips are very elaborate, Poodle dog owners who bring their dogs to shows need to spend vast amounts of time on Poodle dog care and grooming each week. The same is true for owners who may not wish to compete but still prefer their Poodle dogs to display a ‘classic’ poodle clip. Generally speaking, poodle show clips require at least 10 hours of brushing and care per week for a standard poodle.

If you are prepared to keep your Poodle in a much simpler clip you will save a lot of time and money. People who keep their Poodles solely as pets normally opt for this alternative and retired show Poodles that have finished their show career are also normally seen in more low-maintenance clips. The poodle coat is dense and will always require a certain amount of care, but the upside is that it does not shed.

A Poodle dog puppy can melt the heart of anyone, but before you decide to make a purchase you should ask yourself if you are willing and able to care for this dog for the common 12-15 years or even longer. Will you be able to provide it with adequate amounts of love, care, exercise, veterinary attention and companionship? Is the breed right for your and your family? Does your budget allow for a dog?

A common misconception when it comes to Poodles is that they require excessive amounts of coat care. If this is the only factor preventing you from getting a Poodle dog puppy, there is not need to worry. Only show dogs need to be clipped and fluffed in the elaborate way that the Kennel Club requires. If you want to keep your Poodle as a pet only, you can give it a low-maintenance hairstyle. Like most other breeds it will still need a certain amount of grooming, but much less than a show dog Poodle.

Female poodles are prone to develop certain types of mammary tumours, but fortunately enough there is one simple thing that you can do that will greatly decrease the risk of mammary tumours in your dog: spaying. If you decide to purchase a female Poodle dog puppy, you are therefore advised to have it spayed before its first heat cycle unless you intend to keep it for breeding purposes. Many owners keep putting it off, but it should ideally be done before the first heat cycle so pick up the phone and call your vet right away!

The dainty show dog poodle might look like the height of extravagance and snobbishness, but this breed was actually originally created to be a brawny working dog that would not hesitate to throw itself into ice-cold waters during hunting. It is still occasionally used as a gun dog and the show clips that we perceive as ostentatious have evolved from clippings used to provide warmth for major joints during duck hunts in chilly water, while the rest of the body was shaved to minimize drag in the water. Poodle dog training has been carried out for several hundreds of years in Europe and the poodle is a clever creature that learns new tricks and tasks with ease. In addition to being a gun dog, Poodle dogs compete in obedience, agility, herding and tracking. If you are interested in Poodle dog training beyond the basics, there is hardy any limit to what you can teach this versatile dog.

The Poodle breed is plagued by a series of health problems and it is therefore important to purchase from reputable Poodle dog breeders that take steps to eliminate the risk of hereditary disease. If you purchase your Poodle from a puppy mill or similar, the risk of getting an unhealthy dog is much higher than if you were to buy from a reputable Poodle breeder. It is also important to be vigilant against pet owners that allow their Poodles to breed without first checking up their health status and the health status of their parents. This type of pet owners might be well meaning dog lovers, but allowing pets to breed without giving much consideration to hereditary disease will increase the risk of poor health in the resulting puppies. It is therefore best to stick to knowledgeable Poodle dog breeders that know how to minimize the risk of hereditary disease.

A few examples of health problems that you should be aware of since they are fairly common in Poodles are congenital heart disease, entropion (the eyelid folds inward and causes severe irritation), Addison’s disease (the body produces insufficient amounts of steroid hormones), Cushing’s syndrome (high levels of cortisol in the blood), epilepsy, progressive retinal atrophy, trichiasis, hip dysplasia, and patent ductus arteriosus (a congenital heart defect).

The Poodle dog price varies considerably from breeder to breeder, and it is therefore important to ask yourself what you actually get for your money. Is the price high because the Poodle dog breeder has devoted a lot of time and money into the development of healthy and well socialized Poodle puppies, or is the price high because the breeder is the reckless owner of a puppy mill? Has the breeder taken care to chose the right parents, or is he or she simply using the cheapest available dogs? Is the bitch healthy and happy, or has she been forced to produce as many puppies as possible each year? Has the breeder paid to have the Poodle puppies checked by a vet, vaccinated and de-wormed or will you have to pay for this out of your own pocket? These are just a few of the questions you should ask your self when comparing the Poodle dog price offered by different breeders. If you have located a reputable Poodle dog breeder, do not try to save a few bucks by going to a puppy mill instead. Poodles are generally expected to reach an age of at least 12-15 years, but this is naturally not true for unhealthy Poodle dog puppies. Buying a Poodle dog plagued by hereditary ailments can also turn out to be a very expensive purchase in the long run since the dog might require extensive veterinary care. It should be stressed that a high Poodle dog price does not in any way guarantee that you will get a high quality dog – the price might be high simply because the seller is greedy.

The Pug dog is an endearing dog breed that has mesmerized humans all over the world with its affectionate temperament, sturdy little body, brilliant eyes and wrinkly face.

In 1934, the American Kennel Club recognized the Pembroke Welsh Corgi and the Cardigan Welsh Corgi as two different breeds.

The Papillon is a small and delicate dog whose ancestors have been kept by royalty and other affluent families in Europe for at least half a millennium.