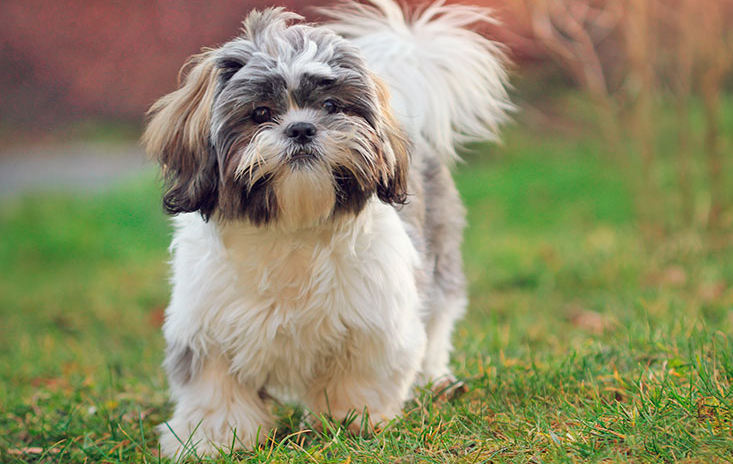 The name Shih Tzu is pronounced shee-tzoo and means Lion Dog in Chinese. The name is believed to originate from the dog’s vague resemblance to the Asian Snowlion, and this breed is also known as Chrysanthemum Dog since its face looks somewhat like the flower. The Shih Tzu was developed in Tibet and is one of the oldest and smallest of the Tibetan holy dogs. It is actually one of the oldest breeds of dog in the entire world. The Shih Tzu was bred as a pet dog, not a working dog, and it is believed to hail, at least in part, from the Tibetan Lhasa Apso and Chinese Pekingnese, but no one knows for sure. Over the centuries, a tradition developed where the Dalai Lama of Tibet would send dogs to the Emperor of China and receive dogs or other gifts in return. This is probably how the Lhasa Apso came to breed with the Pekingese.
In ancient China, the Shih Tzu could be found next to the Emperor where it would keep him company and bark if people or animals approached.

The Shih Tzu was a much guarded national treasure in China and exporting Shih Tzu dogs was prohibited until China became a republic in 1912. The first official record of a Shih Tzu being imported to the United Kingdom dates back to 1931, and the breed was recognized by The Kennel Club in 1934.

Since the Shih Tzu originates from the Imperial Palace of China, it comes as no surprise that this breed requires more care than any ordinary peasant would have time to lavish on it. If you are looking for a low maintenance dog, the Shih Tzu is not a good choice.

One essential part of Shih Tzu dog care is naturally to brush its long coat on a daily basis to avoid tangles. Some owners cut the coat short to save some time, but if you live in a cold climate you should ideally allow your Shih Tzu to keep its long coat at least during the winter. In addition to this, the Shih Tzu is adapted to cool Chinese and Tibetan conditions and is very sensitive to high temperatures. Being a snub-nosed dog (brachycephalic), it can suffer from breathing problems and heat stroke if exposed to high temperatures. Many airlines refuse to ship Shih Tzu dogs if they suspect that the temperature will exceed 75 degrees F (24 degrees C) at any point during the journey.

Another important part of good Shih Tzu dog care is to clean the area around the eyes each day. You can use cotton and some warm water, no soap is necessary. Some owners claim that giving their dogs chlorine-free water to drink reduces the amount of eye mucus, but this has not been scientifically proven.

Just like most other dog breeds, the Shih Tzu dog needs to have its claws cared for on a regular basis.

Unless the weather is too warm, the Shih Tzu is an energetic dog that will enjoy regular walks to burn off energy and explore the neighbourhood.

All puppies are adorable, but do not settle for the first breed you happen to come across. A lot of animals end up in shelters every year simply because their owners did not choose a suitable breed. A Shih Tzu dog puppy is a great choice if you want to dog that stays comparatively small and does not need excessive amounts of exercise. (This doesn’t mean that you can put it in a dog crate and never exercise it at all, it simply means that it needs less exercise than huge working dogs.) Like any other small breed, the Shih Tzu does not require large amounts of food and you will be able to easily fit it into a carrying crate when you travel. A Shih Tzu dog puppy is however only a good choice if you are willing to spend time on coat maintenance throughout its entire life.

As mentioned above, the Shih Tzu was bred to be a house pet and a close companion, and this becomes very clear when you start training it. It loves human company and will often love training sessions since it means it gets to spend time with its owner. Never yell at your Shih Tzu during training, since this will only serve to frighten it. Despite being a little stubborn at times, this breed responds extremely well to praise and if you spend enough time with your dog it will become very devoted to you. Use praise, affection and perhaps some treats during Shih Tzu dog training and you will notice much faster improvements than were you to yell and scare the dog.

Shih Tzu housetraining can start early, but keep in mind that the puppy can not be expected to control its bladder for an extended period until 12 weeks of age. Even at this age, it is still a very young baby and accidents will happen. This does not indicate that your dog is stupid or disobedient; it is simply a matter of physical bladder control. If you catch your dog in the act of urinating or defecating in an improper place, simply say NO in a firm voice and bring the dog outside where you want it to go. By saying NO in a firm voice you can startle your dog into stop what it’s doing. Remember, there is no need to yell or become upset. One firm NO is enough. Give your Shih Tzu puppy a lot of praise when it finishes its business outdoors.

According to the American Kennel Club (AKC) American Shih Tzu Club (ASTC), Shih Tzu dog breeding should strive to develop specimens weighing from 9 to 16 pounds as adults. According to this Shih Tzu dog breeding standard, the dog should have a short snout, big eyes and a palm-like tail that waves above its torso. All coat colours are allowed, the important thing is a long and flowing double coat. In addition to this, the Shih Tzu should be sturdy built.

Since the original purpose of the Shih Tzu was to serve as a companion for the Emperor, it was bred to be an intelligent, friendly and lively pet dog that loved to spend time with both its owner and other people. Today, all reputable Shih Tzu breeding programs strive to keep these temperamental characteristics and create dogs that are happy, friendly, affectionate, trusting and well socialized.

Several health problems are known to plague Shih Tzu dogs and it is therefore important to purchase only from Shih Tzu dog breeders that strive to breed out genetic problems. Reputable Shih Tzu breeders will also make sure that your dog undergoes a comprehensive veterinary exam prior to purchase. Common health issues in the Shih Tzu dog breed is portosystemic liver shunt, hip dysplasia, renal dysplasia and various eye problems. They can also be allergic to red dye #40, which is present in many types of commercial dog foods. The most common sign of red dye allergy is excessive scratching.

The Shih Tzu dog price varies a lot from breeder to breeder. When you compare the Shih Tzu dog price always check what you actually get for your money. Has the dog been vet checked, vaccinated and de-wormed? Are the puppies well socialised? Is this a reputable breeder that strives to breed out genetic disease and temperamental problems? The life span of a well cared for Shih Tzu dog is 9-15 years and spending some extra money on getting a healthy, well socialized specimen is definitely worth it in the long run.