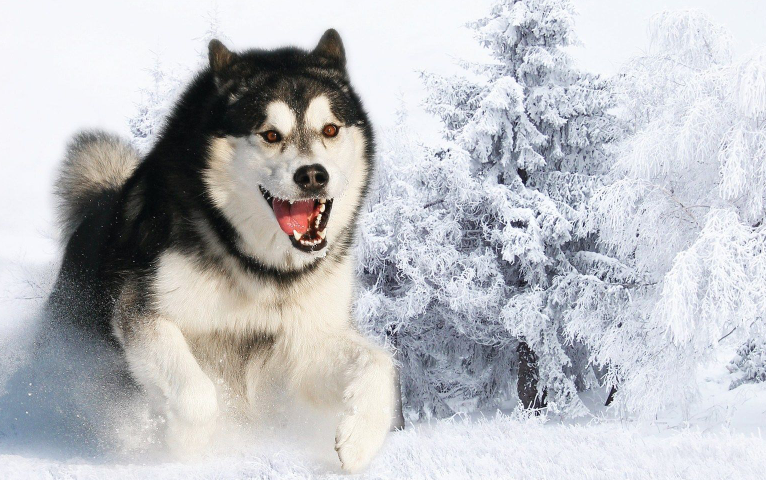 The Siberian Husky is a powerful working dog and it needs frequent exercise, otherwise it will suffer physically as well as mentally. A very important aspect of proper Siberian Husky dog care is therefore to exercise your dog on a daily basis. A simple walk around the block will not do it for this breed – it requires real exercise.

The Siberian Husky is a fuel-efficient dog; otherwise it would not have survived the harsh conditions in the artic. You must therefore take care not to overfeed it. The amount of food must always be balanced against the amount of exercise. A dog that works hard as a sled dog must for instance be given ample portions of protein-rich food, while a non-working dog will do with a lot less. Adding fish oil or fatty cold water fish to their diet is recommended for all Huskies, regardless of how much they work.

In addition to this, a Siberian Husky dog puppy is not a good choice if you want to be able to let your dog play off-leash in areas that are not fenced in with a deep, secure fence. The Siberian Husky can run for long distances and have a weak “homing instinct”. Inside fenced in yards they normally turn into escape artists and can for instance dig deep pits in order to escape and embark on a long journey.

The Siberian Husky is a highly affectionate dog that loves to work, but it is not as eager to please as other more popular breeds. The Siberian Husky was bred to have a will of its own and be able to make important decisions, e.g. refusing to walk on thin ice even if the sled driver unknowingly tries to force it. Due to this inherent strong will, Siberian Husky dog training is difficult for those who have no previous experience with Huskies. The key to successful Siberian Husky training is to be patient and persistent, and providing your dog with other motives than simply pleasing you.

According to the American Kennel Club, the aim of Siberian Husky dog breeding should be to create medium sized working dogs that are intelligent, friendly, gentle, alert and outgoing. Unlike guard dogs, the Huskies should never be possessive or overly suspicious of strangers. A mature Siberian Husky can be reserved, but never aggressive towards other dogs. Unlike many other breeds, the Siberian Husky is still seen first and foremost as a working dog, and Siberian Husky dog breeding should therefore always focus on creating dogs that perform their original function in harness in a most capable fashion. All Siberian Huskies should be able to carry a light load at a moderate speed over great distances.

The Scottish Terrier, also known as the Aberdeen Terrier, is one of give Scottish terrier breeds and was created to hunt small vermin, such as rats, mice and squirrels.

the St. Bernhard is a large and sturdy breed that can traverse deep snow and endure cold conditions without problem.

Poodle dog is today one of the most popular dog breeds and is commonly seen in dog shows all over the world.