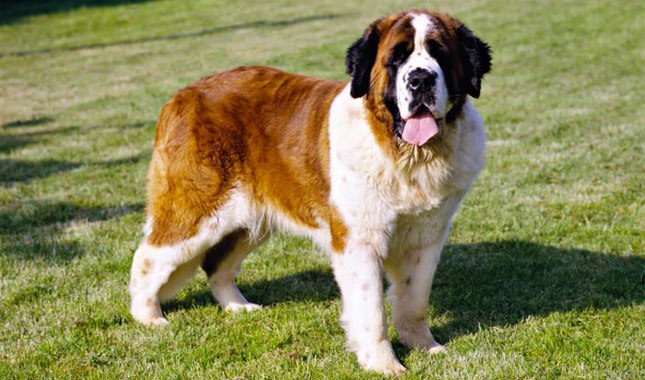 Originally bred to be a rescue dog in the perilous St. Bernard Pass in the Western Alps, the St. Bernhard is a large and sturdy breed that can traverse deep snow and endure cold conditions without problem. The name St. Bernard (Saint Bernard) did not become widespread for this breed until the mid 1800s. Earlier, the dogs were known as Alpenmastiff, Barry Dog, Noble Steeds and Stain Dogs. In parts of North America, St Bernard dogs are still commonly referred to simply as “Saints”. In this article, you will find a lot of St. Bernard dog information. Did you for instance know that a fully grown male St. Bernard can weight over 100 kg (220 lbs)? A Saint Bernard named Benedictine weighed 162 kg (367 lbs) which made him the heaviest dog in the world.

An essential aspect of good St. Bernard dog care is to make sure that your dog gets a proper balance of exercise; not too much and not too little. If young St. Bernard dogs are allowed to exercise too much, their soft growing bones, joints and ligaments can become over-stressed and this can lead to injury. Since the young St. Bernard is filled with a ton of energy, you must find a way to exercise it without risking injury. As your St. Bernard grows older, this becomes less of a problem since bones, joints and ligaments will be more durable and less prone to over-stress. You should however always keep in mind that this breed was developed for cold conditions and hot or humid weather can cause the dog to overheat. Keeping your dog in the shade is an important part of good St. Bernard dog care.

According to the American Kennel Club standard, the aim of St. Bernard dog breeding should be to create strong, muscular and powerful dogs with an intelligent expression. There are two different types of St. Bernard: short-haired (smooth-coat) and long-haired (fluffy coat). The longhaired variant is very similar to the shorthaired type, but is equipped with a medium long coat that is plain or slightly wavy. The hair is normally wavier on the back, from the haunches to the rump.

The first St. Bernard dog breeders were monks at the St. Bernard Pass hospice who strived to create a friendly and loyal dog that could seek out travellers and rescue them in the perilous St. Bernard Pass. In order to create such a breed, they used herding dogs used by Swiss farmers and crossed them with watchdogs and hunting dogs. The first known recordings of rescue dogs at the hospice dates back to the 1600s. These early St. Bernard dogs did however look very different from the St. Bernards of today, because a majority of the dogs used for breeding was killed by an avalanche and the St. Bernard breeders had to introduced new blood to prevent health problems.

The St. Bernard dog price varies a lot and the most important thing is to find out what you actually get for your money. When getting a St. Bernard, it is important to stick to serious breeders that strive to minimize the risk for hip dysplasia and other hereditary problems. You should always find out if parents and puppies has been vet-checked and screened for hereditary disease before you make a purchase. Trying to save some money by selecting the lowest possible St. Bernard dog price without investigating why it is low can turn out to be a very expensive decision in the long run.

The Maltese is a small, hairy dog famous for not shedding.